During our last session, we got to talking about what puts the "life" is a figure sketch. I mean, some drawings might be the loosest, roughest drawings, but they look like they want to leap off the page, and other drawings, though technically perfect, seem somehow flat.

I proposed the feeling of "life" in a drawing is what's often called the "gesture," which is a well defined vector, or line of motion. Take a look at the sports pictures in the back of the newspaper. Whether its football, basketball or baseball, even a horse race, if the picture has a dynamic quality, you can probably trace it back to a clearly defined line of action in the image.

Perhaps you’re seeing a football player slamming against an opponent, a basketball player springing for the hoop, or a baseball player twisting into the follow through of his swing, or that horse rocketing towards the finish, just a nose ahead of the competition. You could even take a pencil, if you wanted to, and go through the paper, drawing arrows where you see a line of action.

Short-poses of 30 seconds to 5 minutes are great for capturing the gesture. One of the pitfalls of longer drawings is that you can get too tied up in the details of each particular area of the drawing, and it comes out “overworked.” What that usually means is that different areas of the picture are directed in different directions, and that it what makes it “flat." If you start your sketch class out with short poses, it warms up your eye & you tend to see the figure in its entirety for the longer poses.

Some of the artists we discussed: 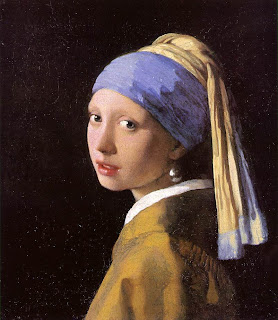 Be aware that the action doesn’t have to be dramatic or intense. Vermeer painted some of the “quietest” paintings ever, loving, placid, candid, moments caught like butterflies, but they are FULL of action. In the famous “Girl with the Pearl Earring,” you might see a simple portrait, but it’s not. It has a quality of life that’s captivating. What’s happening on that canvas? She’s not just posing for her year book, she’s turning to look—at you. The twist in her neck tells you she just noticed you, and the slight rise of her head signals recognition—she’s looking at you and she knows you (and I think she likes you, too). 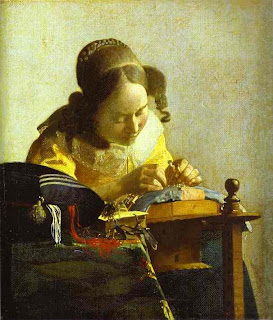 And look at “The Lacemaker.” Or rather, look at what the lacemaker is looking at. You can see her total focus on her work. If you look at this painting for more than a few minutes, you may even hear the rustle of her clothes against the table, Maybe marvel that she’s so focused on her work that she hasn’t even noticed you watching her.

You may notice that in both examples, it’s the direction of the glance, and by extension, the head, that defines the line of motion. I won’t say much more about that, but do go ahead and experiment with it. Notice it in people around you or in pictures, and try it out in your drawings. (anyone with experience in Judo, Aikido or wrestling knows that the opponent’s body follows whatever direction his head moves, especially if you’re moving it for him).

One other thing worth thinking about, but maybe a little beyond the scope of this article, is that in a truly great image, the composition is arranged to highlight and work with the motion. It’s possible for the line of action to be overwhelmed by other elements in the picture. The masters, from Rembrandt to Weegee, were also master stage-designers, in that the entire canvas and everything in it was designed to highlight the action. 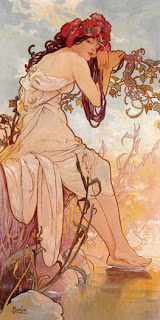 Take a look at the way Alphonse Mucha captures motion in his lines. Notice the way the lines he draws all compliment the motion of the figure—no lines ever cut across the direction of the motion, but rather, all flow with it. You might also be aware of the abstract, yet tombstone-like composition of most of his backgrounds, and how that highlights the dynamism of the figure. Mucha was one of the most famous artist of the Art Noveau period.

Hokusai, the Japanese artist, famous for, amongst other works, “100 views of Mt. Fuji” is equally famous for his “manga” which were printed collections of figure sketches, many of which have an amazing sense of both motion and humor. (for references, I particularly recommend Michner’s “The Hokusai Sketchbooks,” Tuttle, 1958) 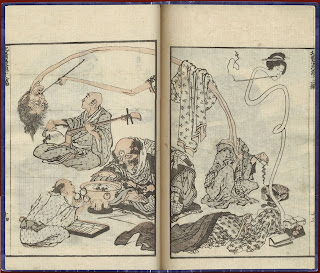 His famous quote (taken from Wikipedia):
The next period, beginning in 1834, saw Hokusai working under the name "Gakyō Rōjin Manji" (The Old Man Mad About Art).In the postscript to this work (100 Views of Mt. Fuji), Hokusai writes:[1]
“ From around the age of six, I had the habit of sketching from life. I became an artist, and from fifty on began producing works that won some reputation, but nothing I did before the age of seventy was worthy of attention. At seventy-three, I began to grasp the structures of birds and beasts, insects and fish, and of the way plants grow. If I go on trying, I will surely understand them still better by the time I am eighty-six, so that by ninety I will have penetrated to their essential nature. At one hundred, I may well have a positively divine understanding of them, while at one hundred and thirty, forty, or more I will have reached the stage where every dot and every stroke I paint will be alive. May Heaven, that grants long life, give me the chance to prove that this is no lie.

A useful but somewhat cryptical resource for sketching, from an Asian perspective, is the Chinese classic on drawing “The Mustard Seed Garden.” Through a series of illustrations, the book presents some very useful examples of proportion, composition and line-character. Obviously, it’s a very culturally-specific book, since it’s seen through the lens of Chinese art. It’s also important to be aware that a lot of the book requires much deeper explanation, or a lot of practice and personal exploration. Implicit in the illustrations are lessons about line quality and character.

For a more thorough and straightforward explanation of the Chinese approach, there’s a great series of four books written by I-Hsiung-Ju, one for each of the “four gentlemen” of Chinese painting (The Book of Bamboo, The Book of Orchid, The Book of Chrysanthemum The Book of Plum) published by the Art Farm of Virginia, 1988. Each of the “gentlemen” embodies a particular kind of line character, and a particular kind of aesthetic, and each gentleman teaches skills built on the skills of the previous. For example, the first gentleman, bamboo, teaches how to put develop strength in lines, and composition using straight lines, and how they break up the space. The second gentlemen, Orchid, uses long lines, like bamboo, but they are more fluid and graceful. This builds on the concepts and strength developed from the previous gentleman.

For a modern American approach, check out books by Burne Hogarth, Frank Frazetta, and George Bridgeman. These are easy to find, and fun to look at and learn from.

It’s definitely worth looking at drawings from all sorts of different artists. Don’t be shy about keeping postcards & Xeroxes on file, and definitely draw your own copies. That’s how the masters learned!
©Jeff Sauber 2009
http://nyfiguredrawing.blogspot.com/
Posted by Jeff at 4:25 PM