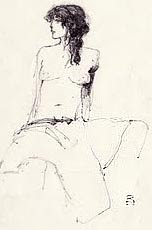 I just discovered that one of my favorite artists/illustrators died about two weeks ago--Jeff Jones, later to become Jeff Catherine Jones.

Frank Frazetta referred to Jones as "the greatest living painter. Jones' paintings combine a poetic, fairytale feel reticent of the great illustrators of the early 20th century with a dynamic, loose and sensuous brushwork and use of color.

His/her paintings graced innumerable paperback covers during what might have been the golden age of paperbacks, around the 1970s, but it was the fun and masterful pen drawings that won me. I first saw his "I'm Age" strips in Heavy Metal Magazine in the 1980s, and the easy, sensuous, unselfconscious lines and painterly use of shadow and texture were something that made a huge impression on me. The silly humor and fascination with the inevitably under-dressed Vermeerish female figures also won me over.

But what I really wanted to share with you guys was this wonderful remembrance by George Pratt, a friend and student of Jones. It is also chock-full of priceless how-to information for artists. Please read & enjoy:
http://georgepratt.wordpress.com/2011/05/24/jeff-jones-1944-2011/

Illustration by Jeff Jones, collection of George Pratt
Posted by Jeff at 12:24 AM No comments: